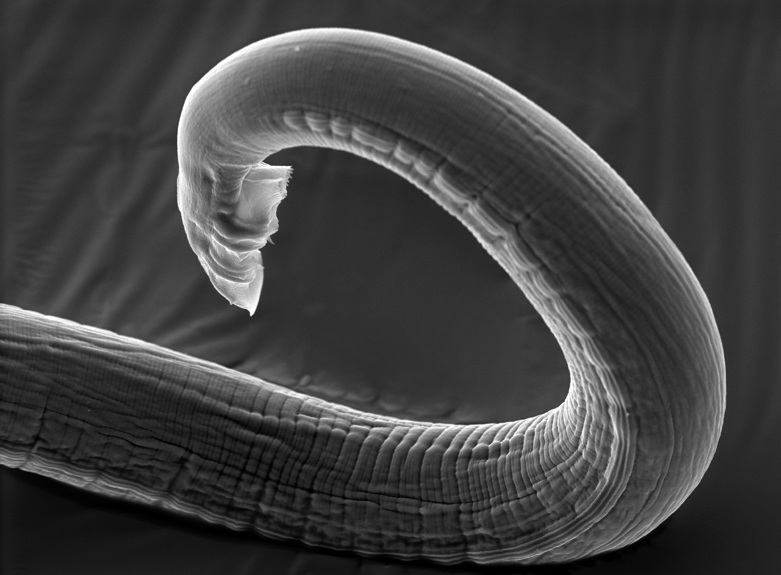 Surely, at some point in our lives, we have all asked ourselves the question: ‘just how can worms help us to cure epilepsy?’ No? Well actually me neither. But a curious quirk of worm neurobiology sparked a recent study by Dimitri Kullmann and his team at University College London, that may pave the way for a new type of treatment for seizures.

Before we can understand how the humble roundworm might just be the next big thing in the treatment of epilepsy, we need to take a step back and ask: how do seizures actually happen? Now, there is no one-size-fits-all answer to this rather complicated question but an accepted general rule is that seizures happen when parts of the brain become uncontrollably active.

In a normally functioning brain there is a delicate balance between opposing ‘excitatory’ and ‘inhibitory’ cells – the first drive electrical activity, the second ones suppress it. Normally the two cell types co-exist like a set of carefully balanced weighing scales. However, it is possible to tip the scales in favour of the ‘excitatory’ cells – either by making them stronger, or by making the opposing ‘inhibitory’ cells weaker. And a tip towards bigger excitation is what causes seizures. In fact, most existing anti-epileptic drugs work by opposing one of these two changes – the drugs either weaken excitation in the brain or they enhance inhibition.

The problem is that current anti-epileptic drugs also reduce normal, healthy brain activity. Epilepsy scientists are well aware of this problem and are coming up with increasingly innovative solutions to get around it.

And on that note, enter the roundworm.

For various reasons known only to Mother Nature (and perhaps also to worm enthusiasts), evolution chose to endow this creature with an unusual biological building block called a ‘glutamate-gated chloride channel’. This name may sound complicated but it’s essentially just a description the protein’s two most important features.

First, it is a ‘chloride channel’. Chloride is important because it is one of the natural ways that the brain uses to create inhibitory strength – and so tip the scales away from seizures. A number of existing anti-epilepsy drugs work by helping to activate the human chloride channels already in a patient’s brain.

And second, this chloride channel is ‘glutamate-gated’. This is very interesting because in mammalian brains, such as our own, glutamate is the chemical which excitatory brain cells use to activate those around them. During a seizure, where the balance tips in favour of excitation, there is an unusually large amount of glutamate and this makes the glutamate-gated chloride channel open.

Taken together, these two properties make this an incredibly promising protein. It is only activated when there are strangely large amounts of glutamate around (ie – when the brain is moving towards a seizure) and, when it does open, it tips the balance back in favour of inhibition. It’s like an on-demand seizure prevention device, which otherwise spares normal brain functions.

So, what happened when Dimitri and his team tested this new channel against epilepsy in rats? Let’s take a look at the paper.

Their first big challenge was to actually get their new treatment into the brain. They did this using a ‘gene therapy’ approach – a one-off treatment that permanently changes the genetic make-up of brain cells so that they are less likely to generate seizures. Basically, they took a harmless virus, which is naturally very good at getting into brain cells, and packaged up the glutamate-gated chloride channel inside it. It’s kind of like a biological trojan horse, filled with anti-epileptic goodness.

And for the sake of these initial experiments in rats, they also put a fluorescent green protein into the virus, so that they could look and the brains under a microscope and check that the treatment was inside the cells. You can see this in figure 1 below.

Next, they had to see if rats with the treatment were more resistant to seizures. To do this, the team divided the rats in to two groups. One group was given the new treatment; the other was given a virus containing only green fluorescent protein, for comparison. They triggered seizures in all the rats using a chemical called pilocarpine and compared the strength of the seizures between rats with and without the treatment. They saw that seizures with the treatment (the blue recording in figure 2) were much weaker than the ones without it (the green recording).

After this, the team repeated the experiment, inducing epilepsy with a different chemical. The important difference here was that the second chemical created epilepsy– it physically changed the brain in a way that caused it to naturally generate seizures. This is different to the first experiment where a physically normal brain was forced to have seizures by a powerful chemical. This second experiment is more realistic to human epilepsy and the team showed that their treatment can reduce the number of seizures generated by an epileptic brain. You can see this in the graph in figure 3.

This is all great so far, but remember that we already have a lot of different drugs which can help to stop epileptic seizures. The big hope with this new treatment was that it would only be activated during a seizure – that it wouldn’t do anything the rest of the time and would just leave the brain working normally.

In their final experiment, the team again injected the glutamate-gated chloride channel into rats but this time didn’t trigger any kind of seizure at all. The idea was that their treatment would be in the brain but wouldn’t be activated without seizures. Excitingly, they showed that the treatment had no effects on either the normal brain activity or the normal behaviour of rats without seizures.

Taken as a whole, we have a new treatment which seems to stop seizures specifically without changing other types of brain activity. It’s a really promising study but there are still some significant hurdles to overcome before we can use it to treat people with epilepsy.

First, remember that it’s only been tested in rats. Animal models are a great way to test new treatments because the brains of rodents are similar to ours, but they are not exactly the same and there’s no guarantee that something which works in a rat will work in a human. The treatment would have to undergo long and careful clinical trials (in other species including small studies of humans) before it could be considered for clinical use. Second, the treatment had to be injected directly into the brain for it to work. Now, this might not actually be terrible – the treatment is permanent so only one injection is needed, and some epilepsy patients do already undergo brain surgery as a last resort. Still, a less invasive way to give the treatment would make it easier and less drastic for both patients and doctors to use.

Nevertheless – this study gives us very exciting results which should serve as a stepping stone to develop treatment with glutamate-gated chloride channels towards medical use.